Economic and Market Update | 15th March 2022
Story Wealth Management are a boutique firm, with an award winning team of highly-skilled financial planners, and a close-knit support team based in Hawthorn. We are united in our concern for our clients’ financial wellbeing, and a desire to help them create the life they want.
financial planning melbourne, financial adviser melbourne, financial advice melbourne
20131
post-template-default,single,single-post,postid-20131,single-format-standard,bridge-core-2.9.1,qode-page-transition-enabled,ajax_fade,page_not_loaded,,qode-theme-ver-28.7,qode-theme-bridge,qode_header_in_grid,wpb-js-composer js-comp-ver-6.8.0,vc_responsive

If we thought 2022 was going to provide some respite, we have been sorely disappointed. I haven’t written a message for some time, as market conditions through 2021 were generally positive. We did see some erosion in the values of a number of Fixed Interest investments, but this was for generally positive reasons i.e. strong economic conditions across globe. Certainly, strong growth included a recovery from the pandemic induced recession, but economic momentum has been such that inflationary pressures were building. Thus, the rise in long term interest rates.

As long-term interest rates rise, the value of fixed interest investments tend to fall. However, over the longer term this tends to be compensated with higher interest income. Nevertheless, nobody has really been concerned whilst equity prices continued to rise. As interest rates are one of the key components in assessing the long-term valuation of ‘growth’ assets (shares, property etc) movements in these markets are followed closely by equity markets.

In early January, equity markets appear to have reached a tipping point. Fears arose that central banks, particularly in the U S and Europe were not acting quickly enough to curb inflationary expectations. As much as anything else inflationary expectations, rather than actual inflation tends to drive long-term interest rates. If these continue to rise it creates a headwind for those companies that have flourished in the era of cheap money. Prior to the last few weeks, the end of cheap money was already generating a significant correction in global equity markets.

What happened next changed everything. Because of the events in Europe, strong economic growth is no longer a given. However, the same events are doing nothing to assuage inflation fears. Back in the 1970’s they coined the phrase Stagflation – an environment of low economic growth and high inflation. The ultimate solution to this economic quagmire was record high interest rates to kill off inflation. Those of us that were their will also recall this policy killed off growth for some time. Nevertheless, it laid the foundations of an extended period of prosperity – a recession we had to have.

The 1970’s episode was largely a result of the oil price shocks of the same period. There are clearly a number of similarities with current conditions. However, there are some significant differences. The following is from a study conducted in 2017 that shows the change in oil consumption compared to GDP. 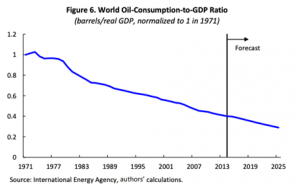 Put simply, the world economy uses ~60% less oil than it did in 1971. Thus, the oil price is less important (notwithstanding the pain you feel paying $2.00 a litre for petrol).

Yes, the disruptions caused by Russia’s invasion have wider implications, not least because of the range of commodities of which Russia is an important producer. Wheat is a good example 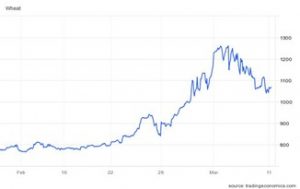 What interest me more about the above illustration, is not so much the levels reached but the volatility of prices – a 50% rise from Feb 28 to March 7, followed by a 17% fall since.

These conditions are replicated across pretty well all tradeable markets, commodities, equities, even bond prices, in a relative sense.

You may recall early in the pandemic I noted that markets were struggling to price assets because of the opaque outcome, and lack of reference points, for the pandemic. We are experiencing similar conditions. If we plot the range of outcomes arising from the war in Europe (still can’t believe we are using that term again…), it is very flat. That is, there is a base case, but the probability of an extreme outcome is higher than you would prefer.

Everyone has a theory, so I may as well give you mine – Russia will retain control of parts of Ukraine, creating a defensive parameter at the Donbass region and the South of the country to Odessa. Hostilities will become sporadic, but a quasi-north/south divide reminiscent of Korea. Vietnam etc. establishes a new status quo. This is of course, no consolation to Ukraine. Nevertheless, it lets Putin declare victory and eases the risk of adventurism by him beyond Ukraine.

Such an outcome would see market volatility ease, if not to ‘normal’ levels. Commodity prices would fall, and we could in theory return to worrying about more mundane issues, like interest rates and inflation.

However, the outcome would probably see Russia remain under heavy sanctions and in circumstances reminiscent of Cuba, Iran & North Korea. We know that in each of these instances the economies collapsed but the regimes remained. We also know that Russia is (or was) the 11th largest economy in the world. The others are of a magnitude smaller. Russia will still matter even if it remains an economic pariah. Thus, the global economy will remain, well, different to what it might have been. How different is speculation, but it can only accelerate the de-globalisation we were already starting to experience.

In the medium term, economies will adapt. As we have seen with other global economic issues, companies will also adapt. This may take some time, but there are some positives to consider. Because of the response to the pandemic, consumers are, generally in good shape. In the U S household balance sheets are in good shape. The banking system is in good shape and unemployment remains low. In Australia the savings ratio remains significantly above the long-term average and household debt has stabilised. House prices appear to have flattened out and inflation here remains relatively modest. Globally, company earnings remain strong with the biggest complaints being trying to find staff.

The global supply chain constraints arising from the pandemic continue to ease. Thus, notwithstanding the outcome in Ukraine, inflation may start to ease mid-year.

As far as investment markets are concerned, sentiment reigns. If you can avoid getting involved in the day-to-day market gyrations, you should. Traders are the only ones who make money in these conditions, and then only the lucky ones. A trader’s market is a zero-sum game, someone wins, and someone loses. Trading is a wealth transfer mechanism. Investing is a wealth creation exercise.

It is always difficult writing these pieces mid-crisis, as the content can become redundant before you hit the send button.

We are still at the point in the current environment where things can certainly get worse before they get better. However, we have every confidence in the quality of the investments you own. They are diversified, so no single investment failure can cause irreparable damage to your portfolio. They are managed by companies and individuals of the highest calibre, who in most cases have ‘skin in the game’.

To paraphrase J P Morgan, ‘in bear markets capital is returned to its rightful owners’. You are the rightful owner of your capital. Don’t give it away.