Economic and Market Update | 29th July 2022
Story Wealth Management are a boutique firm, with an award winning team of highly-skilled financial planners, and a close-knit support team based in Hawthorn. We are united in our concern for our clients’ financial wellbeing, and a desire to help them create the life they want.
financial planning melbourne, financial adviser melbourne, financial advice melbourne
20204
post-template-default,single,single-post,postid-20204,single-format-standard,bridge-core-2.9.1,qode-page-transition-enabled,ajax_fade,page_not_loaded,,qode-theme-ver-28.8,qode-theme-bridge,qode_header_in_grid,wpb-js-composer js-comp-ver-6.9.0,vc_responsive

In regard to ‘real world’ data, these are lagging indicators. What has happened. Even the increase in interest rates by central banks is a reaction to information already at hand. I will ignore crypto for the same reason I ignore the roulette table at the casino; it is totally random.

Bond markets and equity markets are telling two different stories. You will recall, that bond markets were at least three months ahead of central banks in reacting to inflationary pressures. They are now signalling a peak in Inflation and, indeed, falling ‘official’ interest rates in 1 – 2 years’ time. This will only occur if Inflation is tamed. Inflation will only be tamed if supply/demand disequilibrium corrects. For their part, equity markets are seeing the economic numbers and the reaction of the bond market as a ‘light at the end of the tunnel’. A peak in the interest rates cycle and easier monetary conditions in a couple of years’ time will, in the collective wisdom of the equity market, see company profits rebound a return to ‘business as usual’. This totally overlooks the fact that the current earning cycle is yet to reflect clearly slower economic conditions.

The headline writers will be telling you that the two successive quarters of negative growth in the U S means a recession. This is one definition, but, in this case, it is unlikely the U S is already in recession. The following chart shows the quarterly GDP prints have been extremely volatile since January 2020. 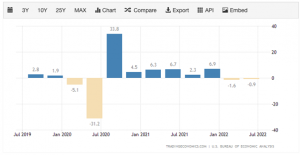 Nevertheless, this does not mean one is not coming. For their part, the equity market is looking at this and thinking ‘great, that is behind us, we can move on’. This explains the rally in U S stocks over the past few days. The last time we saw more than two-quarters of negative growth was during the GFC. Before that, in the early 1980’s.

Meanwhile, those dour devotees in the U S bond market have given us an inverted yield curve. This means short-term rates are higher than long-term rates. 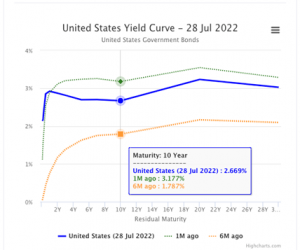 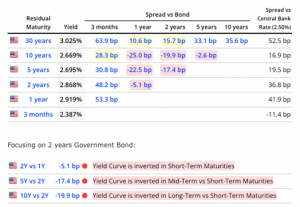 Ok, that is a little busy, but it is why Alan Kohler is suddenly running around saying the RBA will start cutting rates next year. You will see from the right-hand graphic that 1-year bond rates are higher than all other timeframes out to 10 years. Out past 15 years, things normalise.

What Alan & the equity markets are missing, is that the playbook we used during the past 15 years, may not be relevant. That playbook says that as soon as the economy slows and equity markets send out a distress signal, central banks will come to the rescue. In 2009, they did so to, in the face of an existential threat to the financial system. In 2020, they did so in the face of a once-in-a-100-year pandemic. Both crises were un-prompted by central banks. A reaction was required. This downturn is being engineered by central banks. The risk of them coming to rescue markets from an event of their own making is at best irrational.

During the 1970’s Inflation persisted because Fed Chairman Arthur Burns consistently eased before inflationary expectations were sufficiently doused. We effectively had nearly 10 years of on-again, off-again inflation bursts and interest rate cycles. This was only solved when Paul Volker became chairman and squeezed Inflation out of the system ‘at all costs’. So current chairman Powell has a choice of templates to follow.

This time around, nobody needs rescuing. U S consumers have been on a binge since receiving COVID payments. Consumer debt is relatively modest. U S business profits remain high, if moderating. Employment numbers are strong.

Economies have been subjected to various stimuli since 2008. Attempts to normalise have, until now, prompted the risk of ‘deflation’ (i.e. the Euro crises of 2011 -12). These stimuli finally prompted an inflation response when Governments and central banks went ‘all in’ in 2020. The correct response is to now wind these stimuli back and let markets once again stand on their own merits.

The ‘old’ playbook is back. Unfortunately, a generation of investors haven’t read it. Thus, the temptation to bid up share prices in anticipation of the ‘inevitable’ rescue. Bear markets are somewhat schizophrenic. They swing between despair and delight at a frightening pace. This results in sharp rallies and inevitable disappointment.

The good news is, that in contrast to the past 9 months, defensive assets will once again become just that. As you can see from the left-hand chart above, U S 10-year rates have fallen significantly over the past month. Again, this is a warning from the bond market against central banks doing ‘whatever it takes’ to tame Inflation. Nevertheless, with yields across the curve between 2% – 3%, there is at least some compensation for holding defensive assets once again. Therefore, there is no need to chase the intermittent rallies in share prices.

Within markets, there will be opportunities. However, what we have seen over recent weeks is traders herding into things that ‘worked last time’. Again, on the assumption that the cycle will repeat the recent experience. The top 5 gainers on the ASX yesterday were KGN, RBL, ZIP, PBH & TYR.  All are cyber-businesses of one sort or another. All were amongst the ‘hot stocks’ through the pandemic. Some were oversold, but the worst of these were up 20% yesterday.

For anyone holding such investments, I see this more as a second chance at redemption, rather than a resumption of ‘business as usual’.

The next 6 – 9 months will be very interesting. If the past week has made you feel like you are ‘missing the boat’, rest easy. This ain’t over.